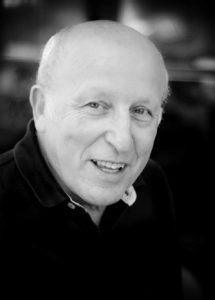 We intended to interview Sasha to our newsletter – but we did not succeed to make it real when he was alive – all of a sudden, he passed away on August 12, 2018. He was not 70 yet .We have waited until the end of “shloshim” to respect his memory.

Sasha – Shmuel Mordechai Klein was born on January 1949 in Munkatch. He was the second child in the family. His father, Haim, was a merchant, his mother was Bluma. His elder brother is Yitzhak Klein – the former chairman of the Carpathian Jews – and his sister is Roza.

The brothers attended a Russian school in the town – it was not closer to them than the Ukrainian one. Russian children, whose parents were high- rank officers, attended the same school. It was known as a school with high standards. Sasha graduated it with excellent results.

They spoke Hungarian at home.

After finishing school, Sasha served in the army as an administrative officer, including a military mission to Prague in 1968.

He studied Journalism in Leningrad after finishing his service in the army (1970-1974).

The family made Aliya in 1974. Sasha wanted to put emphasis on academic studies in journalism, but there were no such studies in Israel. He decided to specialize in documentary films . The Leningrad studies were not recognized. He started his studies in the Tel Aviv University (1974-1978). He went on studying and working in USA.

He was recruited for half a year (second stage) and took a paramedics course, but the army used his cinematic skills instead.

He returned to Israel and worked as an editor and director of different entities, such as CNN, WNT and NBC.

In 1986, he became the founder and director of “Sasha Klein Productions Ltd”. During 30 years, he produced feature films and documentary films. In 1990, he produced the documentary series “Whispering Ember”. It consisted 8 chapters. Chaim Yavin dedicated them to describe the situation of the Russian Jews after the “iron curtain” fell.

He participated in many leading festivals all over the world and, of course, in Israel too. For all these, he was awarded many prizes, including ”Ophir Prize” which is considered the Israeli Oscar. In 1997, he won a golden medal at the international festival in Monte Carlo for his film “The Diary of The Prime Minister”. It deals with the life of Mr. Rabin during the last month of his life. Another film – “Putin’s Games” has been recognized as the best one by the “Academy of Cinema And Television”   of Germany. His film “Thieves by the Law” has won the Europe Prize.

In the years 1996-1998 Sasha served as the General Director of International channels of HBC in Hungary and Czechoslovakia.

Among the recent productions is the feature film “Mirage Adventures”, a feature film-“No One”.

He stretched a helpful hand in setting up our Internet site.

Sasha was also a strategic and leading consultant in elections in Israel, Russia and Hungary.

In Hungary, he worked with Peter Madishi, in Russia – with Konstantin Titov.

Not all his plans came true because of his sudden death.

Moshe Gaon: “A Friend and a dear colleague passed away this week. Sasha was a producer, a director, a creative man and a talented one. I was shocked to get this terrible news at night. Oh, Almighty, how fragile life is”.

Anat Zalmanson-Kozhnizov: “Everyone who knows him – knows he was healthy and diligent. He always answered to the point You can always trust him.

Dear Sasha Klein, dear film producer, with whom I worked to produce my last film, with whom I planned to work many more years to come, suddenly passed away – heart attack in his sleep on Saturday night. Five years ago, while looking for a producer to my film “Operation wedding”, I got to know him. It was when I came back from New York. The truth is – it did not take me too much time. He was the first one – I knew – I finished looking for somebody else. For 2 years, I did it by myself – and now I knew – I could trust him. I felt as if a burden was taken off. Suddenly everything moved and doors opened. It was a great cooperation in our work. I was lucky to have such a wonderful person as my friend. Our relationship was built on honesty, sincerity, openness and mutuality. May be he was the most diligent one I have ever met! He remembered everything, he was never late, he had always strength, he never complained. Sasha was modest and very smart. He always treated people with respect and fairness.