Bushtyno – Bustyahazza (or, in Yiddish, בישטענע)
A village in the Tisza valley, at the mouth of the Tereblya River flowing into Tisza, about 20 km east of Huszt. The village lies on the railroad and the main road between Prague and Yasinya – exactly 1000 km from Prague.
Jews: In the 1728 census, one Jew, Joseph, was mentioned as a proprietor of a tavern. He was the protege of the Graf of Kemeny and paid 130 florins a year for his sponsorship. Presumably, he was the founder of a small community. In the next census in 1735, a Jew named Vigder (Avigdor) is mentioned with his wife and two children. It was mentioned that Vigder owned 3 horses, 2 bulls, 3 cows and 3 calves. Two Jewish servants were helping him. He paid the Graf of Teleki 100 florins a year. Six Jews were living in Bushtyno that year.
There is not much information about the development of the community between 1746 and 1880.
In the records we found that in 1876, Yisrael Krauss purchased the No. 73 house in the center of the village (the Krauss family lived in this house until the deportation in 1944.) In 1880, 142 Jews were counted out of a total population of 1,240. This includes two villages affiliated to Bushtyno, Handal and Beneső.

A view of the “Little Bridge” on the main street 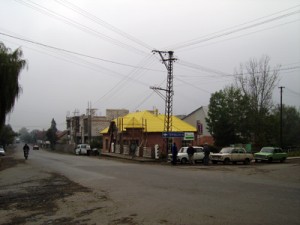