Mizhhirya is located about 36 miles E of Mukacheve and 25 miles NNE of Khust.

In 1921, the Jewish population was 766. The children attended a Czech school. (In the 20’s, there was a failed attempt to establish a Hebrew gymnasium.) A few dozen Jews attended a yeshiva run by the community’s rabbi, Aharon TEITELBAUM. Jews owned most of the businesses (39 of 45 stores) and there were 23 Jews working as artisans. Jews owned a bank and a number of factories, some producing alcoholic beverages and furniture. A few Jews were doctors or lawyers and a few were administrative officials.

By 1941, Mizhhirya had 942 Jewish inhabitants with a synagogue and a mikvah.

Today, Mizhhirya is a large village of about 4,292 inhabitants nestled between two mountains (one, 402 meters high; the other, 424 meters high), hence its name Mizhhirya, which means “between mountains.” A number of Hungarians, Ukrainians, Russians and Ruthenians still live there. A great number of the Mizhhirya’s Jews were murdered in the Holocaust; no Jews live there today. 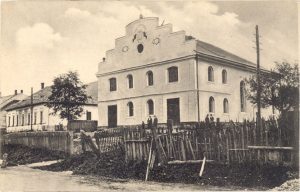