Velikiy Berëznyy is located 21 miles NNE of Uzhhorod (Ungvár), near the borders with Poland and Slovakia.

The first written reference of Velikiy Berëznyy dates from 1409.

In 1427, the town was part of the DRUGETH family estate, and then in 1691, became part of the BERCSÉNYI family estate. The local residents took part in the War of Independence led by Ferenc RÁKÓCZI.

Velikiy Berëznyy became a regional center for many of the smaller surrounding villages and the population was estimated at 3,000 inhabitants. By this time, the majority of the inhabitants were Jews and the rest were mainly Rusyns and gypsies.

There were Peace and Mehozit (Religious) courts for the area with Hungarian or Czech judges. There was also a jail. (no Jews were in it!)

Velikiy Berëznyy had a Gymnasia (high school) which the students attended, including students from the surrounding villages. One student, Ezreal “Joe” DEUTSCH, traveled 21 km from Ladimirov to attend school. The gypsies didn’t send their children to school, although there was a law requiring they receive an education.

In the 1920s, the Jews of Velikiy Berëznyy owned 42 business establishments, including a distillery, a bank and a few small factories. Thirty-one Jews were artisans and several were professionals, including four doctors and three lawyers.

By the early 1930s, Jews were involved in the many fascets of Velikiy Berëznyy economic life, for example: there were ten wholesalers, 40 merchants, ten farmers, 25 laborers, 15 private clerks, 20 self-employed persons, 120 professionals (including five lawyers), a photographer named SIMKOVITCH, 30 Jewish soldiers and 40 others. Also, there were 20 unemployed and 25 on welfare.

The nearest hospital was in Uzhhorod, 40 km away. However, in Velikiy Berëznyy, now there were 5 Jewish doctors: STERNBERG, HENDLER, BRAUN and two others as well as a Jewish midwife (whose son was hanged in 1939 by the Hungarians for being a Communist). There was also a Hungarian Christian doctor.

Velikiy Berëznyy had at least 2 banks (there may have been more) which held money for people, made loans, etc.

The only cars in Velikiy Berëznyy were those of the doctors, who used them for house calls. However, there was also an ambulance to take the sick and injured to Uzhhorod for emergencies. But the doctors, or at least Dr. HENDLER, didn’t drive—they had a driver. Dr. HENDLER rented out his car on occasion and once, Itzak and Batia DEUTSCH (with their three youngest children, Ester, Sari, and Moshe), rented his car and driver to go to Uzhhorod for a day trip to visit Itzak’s brother, Yeheskiel DEUTSCH and his wife Berta and family. The car seats were along the sides, so people sat facing each other.

At this time, Velikiy Berëznyy had five streets, but many people lived without a street setting. The DEUTSCHS lived at 70, Stefanik street, with a large and beautiful garden of both flowers and vegetables. Most Jewish families had such gardens, but the Rusyns grew mainly potatoes. Behind the DEUTSCH house, was another building with 2 apartments that was being rented by Jewish families named ROTH and MITTELMAN.

In 1939, the Hungarians occupied Velikiy Berëznyy cutting off the Jews from their livelihoods. A few dozen Jews were drafted into the Hungarian slave labor battalions, with some perishing on the Eastern front.

In late July, 1941, a number of Jewish families without Hungarian citizenship, were deported to Kamenets-Podolski in Ukraine, where they were murdered.

The remaining Jews of Velikiy Berëznyy were deported to Auschwitz in May, 1944.

Today, Velikiy Berëznyy has a population of 6,665 (2001) inhabitants. The district has camp sites and campgrounds in the mountains, with ski lifts nearby. There is also a national conservation park—established in 1866—with unique and rare plants. Also, the district has several architectural masterpieces, among other things, wooden churches. One of the biggest attractions is the Knyahinanszki meteorite, which crashed here in 1866. Only one Jewish lady lives in Velikiy Berëznyy today (2011). 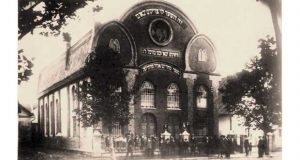