Khust was part of the Kingdom of Hungary (11th century – 1920 and 1938-1944) with the name of Huszt in Máramaros megye (county), next part of Czechoslovakia (1920-1938) with the name of Chust in Podkarpatská Rus (Sub-Carpathia), then part of the Ukrainian Soviet Socialist Republic (1945-1991) with the name of Khust and, since 1991, known as Khust, in the Khustskiy rayon (district) of Zakarpats’ka oblast (county) of Ukraine.

In Yiddish, Khust was known as Husst.

Other spellings/names for Khust are Hust, Huste, Khost and Guste.

Khust is located about 32 miles SE of Mukacheve (Munkacs).

By 1921, during the Czechoslovakian period—when Chust became a county seat—the Jewish population rose to 3,391.

Most of the city’s industry, trade, business establishments and workshops were in Jewish hands, for example the cinema houses, retail and wholesale businesses, wine cellars, half of the clothing stores, shoe stores, electricity facilities, wood trade, carpentry, textile shops and canned goods factories. Jews also owned three banks, factories, flour mills and the Korona and Central hotels. A number of Jews belong to the professional class in the community, which included seven doctors, three pharmacists and some administrative officials. Jews were also involved with selling grains, fruit and cattle. Various Jewish political parties were active, such as Agudat Israel, Zionist organizations, orthodox youth groups and the Jewish national party which represented the community in the municipal Council.

With the Hungarian occupation of Khust in March, 1939, Jews were persecuted and pushed out of their occupations. In 1940-41, dozens of Jews from Khust were drafted into forced labor battalions and others were drafted for service on the Eastern front, where most died.

By 1941, the Jewish population had increased to 6,023 (of a total population of 21,118) and it was at this time, a few Jewish families without Hungarian citizenship were expelled to Nazi occupied Ukrainian territory, to Kamenets-Podolski, and murdered there.

When the Germans took over Khust in March, 1944, 5,351 Jews were living here and were moved into a ghetto along with over 5,000 Jews from the surrounding towns and villages. Rather than be moved into the ghetto, a few dozen Jews escaped from Khust and volunteered for the Czechoslovakian army—created in the Soviet Union—to fight against the Nazis on the eastern front.

The remaining Jews of Khust were deported to Auschwitz late May, 1944, and a great many of the Jews from Khust were murdered in Auschwitz.

In early February, 1945, the first Jewish survivors to return were Mr. WERTHEIMER, Yossi ROSENBERG and Zvi MENSHEL. By the summer of 1946, the number of Jews in Khust increased to 400. However, most Jewish families that returned soon settled elsewhere. 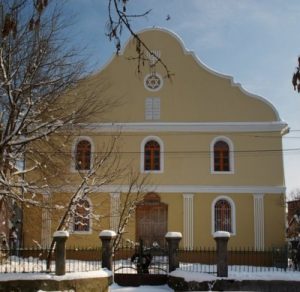 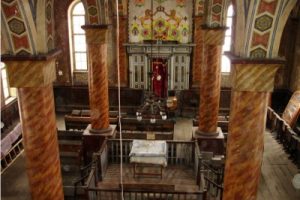